Anastasia: Adventures with Pooka and Bartok

At eighteen, Anastasia sports a strong personality and a detailed appearance. She sports a sharp jawline, long auburn hair ( short when in a ponytail ) and bangs, engaging blue eyes, fair skin, and a natural pink tint to her cheeks. As an orphan, she adorns a greyish-green frock, a button-up yellow dress, black tights, and a pair of brown boots. She grows out of style multiple times, memorably for her fantasy in the old palace, wearing a sparkling golden dress with her hair in a blue-ribboned ponytail, with a pearled necklace and a matching blue sash.

Anastasia was a carefree, playful child before the Russian Revolution. At age 18, she is almost completely clueless of who she really is but she still tries to have fun while finding answers. She is witty when talking to Dimitri and often leaves him speechless. Overall, Anastasia is a strong ( yet sarcastic ) and reasonably loyal girl at heart.

In the Don Bluth's animated version, the same character is nicknamed as Anya (voiced by Meg Ryan in the speaking lines, sung by Liz Callaway in the singing lines, voiced by Kirsten Dunst in in the speaking lines and by Lacey Chabert in the singing lines). In the beginning, during the Romanov tricentennial, Anastasia is seen as carefree and playful because she's a princess. Her grandmother, Dowager Empress Marie Feodorovna (Angela Lansbury) gave her a music box that plays the lullaby, "Once Upon a December," and a necklace to wind up the music box, the necklace is scripted with the words, "Together in Paris." Then, Grigori Rasputin (Christopher Lloyd) shows up uninvited and promises to kill the Romanov family, thus starting the Russian Revolution. Anastasia and her Grandma found themselves trapped while trying to flee the palace, but the kitchen boy, Dimitri opened a secret door that helped them escape. Anastasia forgot her music box and when she tried to get it, Dimitri insisted that she leave while she still could, all while Bartok reports from the window; informing Rasputin that the young Duchess was escaping. The troops then burst through the door and they knock out Dimitri but the music box is safe. Meanwhile, Anastasia and her Grandmother tried to get to the train station to escape the revolting chaos by running across the frozen river under the bridge. But, Anastasia is apprehended by Rasputin when he surprises them by leaping off the bridge, only managing to grab a hold of the girl's foot. Her grandmother helplessly clinging onto her arm in the hopes of dragging her to freedom while the evil man violently trashes her about, tightening his grip on her snow-drenched leg. Before he could finish the two, the ice of the river cracks. Anastasia, finding leverage with her free foot, wretches her ankle loose of the evil grip and Rasputin sinks and drowns to the bottom. At the train station, Anastasia and her Grandmother almost make it. Anastasia tries to hang on to her Grandmother's hand but fails when she slips before her head fell against the track. Marie never saw Anastasia again after that.

Then, 10 years later, Anastasia (now 18) is seen leaving the orphanage she stayed at after the Russian Revolution. She is now called Anya. She then sits in front of a crossway to "wait for a sign or a hint." Out of nowhere, a dog shows up and convinces Anya to go to St. Petersburg (NOTE: Anya later names the dog Pooka). After arriving in St. Petersburg, Anya visits the abandoned Catherine Palace (in which Pooka went in first) and then she meets con artists Dimitri (played by John Cusack) and Vladimir (Kelsey Grammer). At first sight, the con duo knows for sure Anya has a strong resemblance to the real Anastasia; the two plan to bring her to Paris where the Empress is, have them meet, and the two of them will receive the grand reward for "finding" the lost princess. However, little do they know (including Anya) that Anya really is Anastasia. Meanwhile, Bartok (Hank Azaria), Rasputin's albino bat minion, notices that his master's reliquary (which has been inactive for years) suddenly wakes up after seeing that Anastasia is alive. It then drags Bartok to the Limbo, a dimension in which Rasputin has been in ever since he died. After being informed that Anastasia is, in fact, alive, Rasputin summons his green, bat-like minions to finish what was started 10 years ago.

Meanwhile, as the trio (plus Pooka) take a train to Paris in the following morning, they have no idea that Rasputin's green minions have successfully managed to overheat the train engine and separate it, its coal tender, and its baggage car from its dining car, coach, and observation car, in an attempt to kill them. However, thanks to Dimitri, they all have managed to "jump" off the runaway train safely after the overheated engine and its coal tender, along with it separated ruined baggage car both plunge off the bridge and hit the bottom, crashing and igniting into a giant ball of fire. They then take a boat across the North Sea to continue their trip. That night, Anya slept-walked on the boat and was dreaming about playing with her family. Pooka wakes Dimitri up and shows him that Anya is not in her bed. Rasputin's minions then enter her dream and turn it into a hellish nightmare, but just as they are ready to kill Anya, Dimitri wakes her before she jumped off the boat. The trio finally reaches Paris to go and see the Empress but Anya had to prove she was the Grand Duchess by answering questions by Marie's first cousin, Sophie. After she vaguely mentions a boy saved her at the palace 10 years ago, Dimitri realizes that Anya IS the Grand Duchess, for he was that same boy. Sophie is convinced and arranged a meeting with the Empress after a Russian ballet.

Dimitri meets with the Empress and tries to explain that he really found Anastasia, but she refuses to give him the reward because he was a conman who was only in it for the money. She then calls security to escort him out and Anya heard it all. Dimitri tries to explain but Anya refused to listen, slapped Dimitri, and stormed off in anger from being tricked and used.

Anya is then seen in her dressing room packing her things when she hears a knock on the door. Thinking it's Dimitri trying to apologize, she shouts "Go away, Dimitri!" Then Marie enters the room and Anya apologizes for the outburst. Marie then shows Anya the music box (which Dimitri had kept all these years) and when they start singing the lullaby, "Once Upon a December," Anya finally realizes who she really is and the two embrace in love. Meanwhile, Rasputin, having left the Limbo, is now planning to kill Anastasia "tonight."

And so, Anastasia and Pooka wander through the garden and onto Pont Alexander III where Rasputin tries to kill her. Then Dimitri comes to save her but is injured and knocked out.

Anastasia survives and is filled with hatred. She attacks Rasputin and both wrestling body to body. Anastasia tries to kill Rasputin but he pushes her. But Pooka throws the reliquary Anastasia and she crushes it "for Dimitri, for [her] family, and for [him]." The minions then destroy Rasputin's body and he turns to dust, his remains get blown away by the cold wind. Anastasia and Dimitri then makeup and are portrayed in the last scene as finally becoming a couple, presumably getting married and living happily ever after. 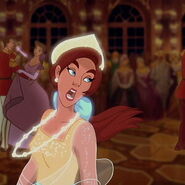 Differences from the source material