Garfield and Friends
The Garfield Show

Debra Messing (Garfield: The Movie)
Audrey Wasilewski (CGI Films and The Garfield Show)
Arlene is a major character in the Garfield comic strip, movies and the show.

She first appeared on December 17, 1980, and her name was first mentioned a day afterward. Arlene regularly appeared in the strip in the 1980s, but has been shown less often since then. Arlene was supposed to appear in what was supposed to be Garfield's first animated feature film, Garfield's Judgment Day, though it was canceled due to no one funding the production. She later appeared in The Garfield Show as a minor character and has made most of her appearances in the first and third season. 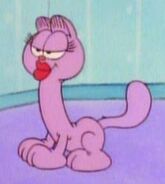 Arlene in Garfield and Friends 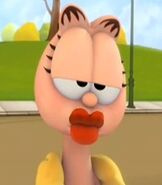 Arlene in Garfield: The Movie
Community content is available under CC-BY-SA unless otherwise noted.
Advertisement