Barbra Streisand is an American singer, actress, and filmmaker. She is best known for films such as Funny Girl, Hello, Dolly!, The Way We Were and A Star Is Born.

Streisand was born on April 24, 1942, in Brooklyn, New York City, the daughter of Diana (born Ida Rosen) and Emanuel Streisand. Her mother had been a soprano in her youth and considered a career in music, but later became a school secretary. Her father was a high school teacher at the same school, where they first met. Streisand's family was Jewish. Her paternal grandparents emigrated from Galicia (Poland–Ukraine) and her maternal grandparents from the Russian Empire, where her grandfather had been a cantor.

In August 1943, a few months after Streisand's first birthday, her father died at age 34 from complications from an epileptic seizure, possibly the result of a head injury years earlier. The family fell into near-poverty, with her mother working as a low-paid bookkeeper. As an adult, Streisand remembered those early years as always feeling like an "outcast", explaining, "Everybody else's father came home from work at the end of the day. Mine didn't." Her mother tried to pay their bills but could not give her daughter the attention she craved: "When I wanted love from my mother, she gave me food," Streisand says.

Streisand recalls that her mother had a "great voice" and sang semi-professionally on occasion. During a visit to the Catskills when Streisand was 13, she told Rosie O'Donnell, she and her mother recorded some songs on tape. That session was the first time Streisand ever asserted herself as an artist, which also became her "first moment of inspiration". She has an older brother, Sheldon, and a half-sister, singer Roslyn Kind, from her mother's remarriage to Louis Kind in 1949.

Her first film was a reprise of her Broadway hit, Funny Girl (1968), an artistic and commercial success directed by Hollywood veteran William Wyler. Streisand won the 1968 Academy Award for Best Actress for the role, sharing it with Katharine Hepburn (The Lion in Winter), the only time there has been a tie in this Oscar category. Her next two movies were also based on musicals—Jerry Herman's Hello, Dolly!, directed by Gene Kelly (1969); and Alan Jay Lerner's and Burton Lane's On a Clear Day You Can See Forever, directed by Vincente Minnelli (1970)—while her fourth film was based on the Broadway play The Owl and the Pussycat (1970).

During the 1970s, Streisand starred in several screwball comedies, including What's Up, Doc? (1972) and The Main Event (1979), both co-starring Ryan O'Neal, and For Pete's Sake (1974) with Michael Sarrazin. One of her most famous roles during this period was in the drama The Way We Were (1973) with Robert Redford, for which she received an Academy Award nomination as Best Actress. She earned her second Academy Award for Best Original Song (with lyricist Paul Williams) for the song "Evergreen", from A Star Is Born in 1976, in which she also starred.

Along with Paul Newman, Sidney Poitier and later Steve McQueen, Streisand formed First Artists Production Company in 1969 so actors could secure properties and develop movie projects for themselves. Streisand's initial outing with First Artists was Up the Sandbox (1972).

From 1969 to 1980, Streisand appeared in Top Ten Money Making Stars Poll, the annual motion picture exhibitors poll of Top 10 Box Office attractions a total of 10 times, often as the only woman on the list. After the commercially disappointing All Night Long in 1981, Streisand's film output decreased considerably. She has acted in only eight films since. 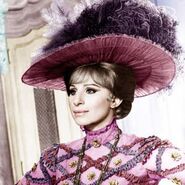