Bartholomew JoJo "Bart" Simpson Jr. is Bart's imaginary son, whom Bart envisioned in a future where he never passed the Fourth Grade.

In Bart's vision, he had been held back in the fourth grade for years. He had a wife and was in the same class as his son. An elderly Mrs. Krabappel asked a middle-aged Bart Sr. for the name of the pirate Treasure Island. When he couldn't come up with the name, Bart Jr. told him it was Long John Silver. Mrs. Krabappel then punished both of them by giving them detention. 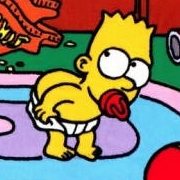 Add a photo to this gallery
Retrieved from "https://20thcenturystudios.fandom.com/wiki/Bart_Simpson_Jr.?oldid=31669"
Community content is available under CC-BY-SA unless otherwise noted.