Family Guy Video Game!
Family Guy: Back to the Multiverse

Brian Griffin is a fictoinal character from the animated television series Family Guy. An anthropomorphic white dog voiced by Seth MacFarlane, he is one of the show's main characters as a member of the Griffin family. He primarily works in the series as a less-than-adept writer struggling to find himself, attempting essasy, novels, screenplays, and newspaper articles.

Brian was born on a farm in Austin, Texas, in a litter of five puppies. His mother Biscuit, his father Coco. He was apparently abandoned by his mother, which lead to most of his personal problems. In "Don't Make Me Over", he is embarrassed for hostility barking at a famous rapper and blamed his upbringing by his father Coco. At the end of the episode he becomes enraged because he is thinks that the camera man is shocked bacause he turned off a black TV program and explains that he only turns it off because he's tired and not because it's a black show. He is said to be 8 years old in "The Man with Two Brians".

When reunited with his first owner in "Road to Rhode Island"..In the same episode, he discovers that his mother died and was made a good-intentioned but insensitive requiem of how nice of a table she was.

Brian is hit by a car and killed in "Life of Brian". The family decides to move on with their lives and buys a new dog, Vinny. However, Stewie is still depressed and tries to ask the Santa at the Quahog Mall to help bring Brian back without luck in "Christmas Guy". Spotting himself on a trip to the past, present-day Stewie "borrows" the time pad from his former self and warns Brian in time to save him. 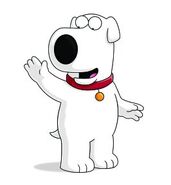 Brian as a puppy 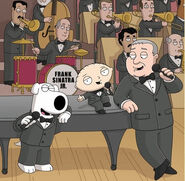