Brooke is a main character of the popular Ice Age franchise. She is a British ground sloth living in Geotopia who becomes Sid's love interest and new girlfriend. She debuts in Ice Age: Collision Course as one of the main protagonists.

She is voiced by Jessie J.

As a resident of Geotopia, Brooke stayed young and beautiful with the crystals, living with the other Geotopians. While they were searching for the asteroid landing site, Brooke noticed the Herd's arrival on her crystal hoverboard, to which she giddily exclaimed how they almost never have visitors, asking them if she's dreaming and pinching herself and Julian at the same time before falling off her crystal hoverboard as she noticed Sid, instantly falling in love with him. She called her minicorn squad of two, Bubbles and Misty, and has them bring Sid toward her. She happily took them to the Shangri Llama. Later she is seen playing an instrument while Sid rests his head on her lap, enjoying his attempts to flirt with her before she excitedly proposed to him. Sid accepted. She is thrilled as Sid excepts, but calmly advises Sid against pulling a diamond looking crystal from the wall when he tells her he needs to get her a ring. Unlike the other residents, she acts calmly when Sid ends up breaking the wall, even acting calm when she turns to her actual age and becoming old and grey.

When the mammals learn they need to throw the crystals in the volcano and Shangri Llama refuses, she uses a motivational speech to change their minds, getting them to start gathering. After saving their lives, Brooke kisses Sid in celebration. Afterwards, she tells Sid that she's going to stay in the remains of Geotopia, thinking it better to let him go because of her old age. Before he leaves, she gives him a rock slab with her picture that she drew, laughing when he gives her a rock slab with a sloppy drawing of himself. While in the hot spring with Shangri Llama, Granny, Teddy, and some other residents, a stray crystal flies out of the volcano and into the spring, creating the Fountain of Youth and restoring her to her young and beautiful self. She shows up right after Peaches and Julian's wedding, looking for Sid. When she sees him, they run to each other. She picks him up, only to fall from the weight. They then profess their love. She is seen at the after wedding party, singing "My Superstar" to Sid as the mammals dance, officially part of the Herd. 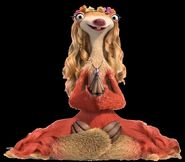 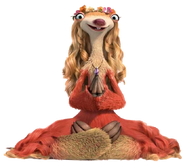