Cyrus Simpson is the older brother of Abe Simpson. The two were together in the 2nd World War Navy pilot on a carrier in the Pacific. But in an air attack of the enemy the two were separated and crashed on different islands. Abe on an uninhabited, Cyrus on Tahiti. Abe could flee from the island, but Cyrus liked it so much in Tahiti that he was never there anymore. Today he lives there with his 15 women. 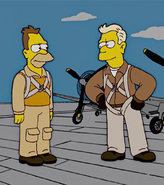 Cyrus and Abe on duty during WWII.
Add a photo to this gallery
Retrieved from "https://20thcenturystudios.fandom.com/wiki/Cyrus_Simpson?oldid=32113"
Community content is available under CC-BY-SA unless otherwise noted.