2
Drew Blythe Barrymore (born February 22, 1975) is an American actress, producer, director, author, talk show host, and entrepreneur. She achieved fame as a child actress with her role in E.T. the Extra-Terrestrial (1982). She is the recipient of numerous accolades, including a Golden Globe, a Screen Actors Guild Award, and a BAFTA nomination. She is a member of the Barrymore family of actors, and the granddaughter of John Barrymore.

In 1995, Barrymore and Nancy Juvonen formed the production company Flower Films. They have produced several projects in which Barrymore has starred. In 2013, Barrymore launched a range of cosmetics under the Flower banner, which has grown to include lines in makeup, perfume, and eyewear. Her other business ventures include a range of wines and a clothing line. In 2015, she released her memoir, Wildflower. Barrymore received a star on the Hollywood Walk of Fame in 2004.

Danielle de Barbarac
(Ever After) 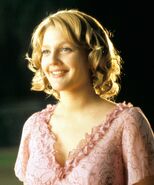