20th Century Studios Wiki
Register
Don't have an account?
Sign In
Advertisement
in: Characters, Females, The Simpsons Characters,
and 4 more

Greta Wolfcastle is the daughter of famous actor Rainier Wolfcastle.

She is first seen being bullied by Jackington and two other bullies, who play keep-away with her backpack. She is saved by Bart and they started to go out. After Bart thought she was becoming too needy, he broke up with her, which led to Greta dating Milhouse to get back at him. Bart, now jealous, planned to do everything he could to win her back and followed her to Canada where he and Milhouse got into a fight during a curling game. In the end, Greta broke up with both Bart and Milhouse and agreed to stop dating for several years so that she could co-produce her father's movies. 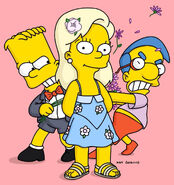 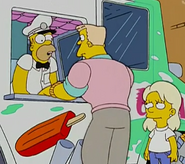 Greta standing in line for ice cream with her father.
Community content is available under CC-BY-SA unless otherwise noted.
Advertisement