20th Century Studios Wiki
Register
Don't have an account?
Sign In
Advertisement
in: Characters, Males, The Simpsons Characters,
and 14 more

The Simpsons Movie
Futurama - Into the Wild Green Yonder (cameo)

Being left for the underground by his mother, being told what to do, going back to Springfield (formerly), working

Homer Jay Simpson is the husband of Marge Simpson, the father of Bart Simpson, Lisa Simpson, and Maggie Simpson, the brother-in-law of Patty and Selma, the son-in-law of Clancy Bouvier and Jacqueline Bouvier, the nephew-in-law of Gladys Gurney and Lou Gurney, the grandson-in-law of Pepe Bouvier, Bambi Bouvier, Ferdinand Gurney, and Alvarine Gurney, the son of Abraham Simpson and Mona Simpson, and also the grandson of Orville Simpson and Yuma Simpson. Homer is overweight, lazy, and often ignorant to the world around him. Though Homer has many flaws he has shows great caring, love, and even bravery to those he cares about. He served as the main protagonist of the TV Series and the film 2007.

Homer works as a low level safety inspector at the Springfield Nuclear Power Plant in Sector 7G although he is often incompetent and mostly sleeps on duty and eats the donuts that are provided. 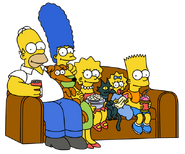