Joseph Frank "Joe" Pesci is an American actor, comedian and musician, known for playing tough, volatile characters, in a variety of genres. He is best known for a trio of Martin Scorsese films in which he co-starred with Robert De Niro: Raging Bull (1980), Goodfellas (1990), and Casino (1995).

Pesci was nominated for the Academy Award for Best Supporting Actor for his role in Raging Bull, and later won the award for his role as psychopathic mobster Tommy DeVito (based on Thomas DeSimone) in Goodfellas. 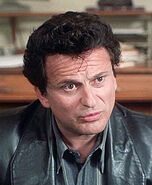