20th Century Studios Wiki
Register
Don't have an account?
Sign In
Advertisement
in: Characters, Males, The Simpsons Characters,
and 10 more

Herschel Krustofsky was born to Jewish parents and grew up in the Lower East Side of Springfield. His father, respected Rabbi Hyman Krustofsky, came from a long line of rabbis, looking for his son to follow in his footsteps. Hyman forbade his son from becoming a clown, but Herschel continued anyway, getting his first laughs at his Yeshiva impersonating his father. His father continued to try and discourage his son, by talking away his props, such though entertaining the Rabbis at the Talmudic conference. Wearing clown make-up to hide his appearance, he is well received by the crowd, making balloon sculptures of the Menorah and the Star of David. However, someone sprays water over his face, his identity is revealed, much to the dismay of his father, who disowns him. He never had a Bar Mitzvah.

After this, Krusty moved to Tupelo, Mississippi, where he worked as a street mime. His first TV appearance was in the 1950s on "The Milk of Magnesia Summer Cavalcade", pretending to be a Russian satellite. However, he said the word "Pants" which got him banned from TV for 10 years. He then got another chance on "Laugh-in", but got stuck behind the shutter doors, putting his career back another 22 years.

In 1962, Krusty worked in Las Vegas briefly after running in to Murdering Mort "The Murderer" Murderosi. He was approached to do 1,000 shows at Murderosi's casino, Nero's Trough. Krusty had his own slot machine on stage, but got addicted and chased out by the police. He then went on to Branson, Missouri.

He then got his own television show, The Krusty the Clown Show, which featured Krusty discussing current events with serious guests (an episode of the show datei February 6, 1961, featured AFL-CIO president George Meany and a discussion of the "labor crisis in American"). 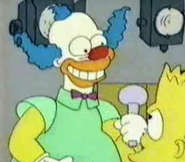 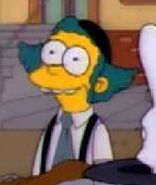 Krusty as a child 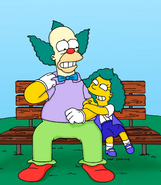 Krusty and Homer. The mob can't recognize who is Krusty because of the similarity

Krusty at his daughter Sophie.