Garfield: The Movie
Garfield: A Tail of Two Kitties

Garfield on the Town
Garfield's Thanksgiving

Garfield and Friends
The Garfield Show

In the strip, Jon had attempted to ask her out on a date many times over the years, but rarely succeeded. She sometimes agreed to date him, but those outings usually became disastrous (often thanks to Garfield tagging along for the ride.) However, in a series of strips from the Summer of 2006, Liz finally admitted that she had feelings for Jon. The two have been portrayed as a couple ever since, though Jon's trademark geekiness continues to both amuse and embarrass Liz.

Although she has somewhat of a deadpan and sardonic persona, Liz rarely reacts negatively to Jon's outlandish and goofball behavior, even finding it endearing enough on occasion to give him a date. After becoming his full-time girlfriend, Liz continues to maintain her stoic personality, but balances this with her best attempts to be supportive of Jon. 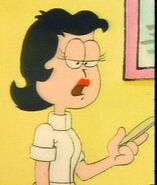