Orville married Yuma Hickman in the early 1900s. The two soon had their first son, Hubert, with Tyrone coming two years later. they had their third son, Cyrus. Sometime afterwards, they had their fourth son, Abraham 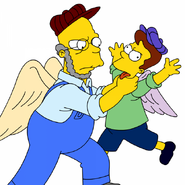 Orville with his son, Abe.
Add a photo to this gallery
Retrieved from "https://20thcenturystudios.fandom.com/wiki/Orville_Simpson?oldid=34316"
Community content is available under CC-BY-SA unless otherwise noted.