Philip J. Fry is the main protagonist and character of Futurama. In the future. Fry is the executive delivery boy of Planet Express, which his distant nephew Professor Hubert J. Farnsworth own. Before being employed by Planet Express in the year 3000 he had worked for Panucci's Pizza during the late 20th century. On New Year's Eve 1999 he was cryogenically frozen by accident while on delivery. The cryo-tube timer was set at 1000 years: hence Fry woke to the last moments of the year 2999.

Philip J. Fry is a dim-witted man from the 20th century who gets frozen for 1,000 years, thawing out on New Year's Eve 2999. His character is largely an attempt by the show's creators to make the connection between the 20th century and the 31st century much easier for the viewers. Often, Fry is faced with differences in the future, which he then relates to things in his time. As a result, he frequently has to defend the actions of the 20th century.

Although he is often depicted as stupid, Fry does occasionally come up with brilliant schemes to save the day, an ability which possibly comes from his intense love of Star Trek. Fry, rivaled only by the energy being of Melllvar, has the largest encyclopaedic knowledge of Star Trek. in the future. Another example of Fry's occasional brilliance was durning the Brain spawn attack on Earth by With the rest of the crew stupefied, Fry was able to save Earth by exploiting the Brainspawn's weaknesses. Strangely enough, Fry's stupidity appears to be his greatest strength as he the only known person in the universe who lacks a Delta brainwave and therefore is immune to the Brainspawn's stupification fields. Ken, a Nibblonians, has noted he possesses a "superior yet inferior" mind. He lacks the Delta brainwave because he is actually his own grandfather.

Also because he lacks the Delta brainwave, he is immune to telepathy.

Fry is also usually quick to make very rash decisions, such as traveling back to the year 2000 or stowing away on Zapp Brannigan's ship to leave the universe after being upset about Colleen.

Philip J. Fry was born on August 14 1974, in the Brooklyn Pre-Med Hospital in Old New York, a native of Flatbush, Brooklyn. Fry is the second son of Yancy Fry Sr. and Mrs. Fry.

During his formative years, Fry endured a great sibling rivalry with his older brother, Yancy Jr. Yancy constantly stole his ideas and, shortly after Fry was born, even wanted his younger brother's name. Yancy also frequently belittled Fry. Fry also spent of a lot of time playing video games and watching Star Trek. He was never admitted to public school because his parents. felt it would be a waste of taxpayer's money.

Fry never made a success of himself, and during his twenties (or late teenage years) he got a job at Panucci's Pizza as a pizza delivery boy. While working for Mr. Panucci, he met up with Michelle and they began a relationship. On a delivery in 1997, he meets up with Seymour Asses, a dog he names after the addressee of the prank caller who ordered the delivery. Seymour becomes his best friend.

Cryogenically Frozen - for a Thousand Years

On the fateful night of New York's Eve, 1999, Fry is sent on another prank delivery to I. C. Weiner. When he arrives at the distination, Applied Cryogenics, he realizes that it is a prank, but since he won't make it back to Panucci's before midnight, he decides to celebrate the New York where he is. Then, while leaning his chair too far backwards, he falls into a cryogenics tube, which closes and freezes him for a thousand years.

On Year's Eve, 2999, the tube's timer finishes and Fry wakes up again. He is not at all sad about leaving his old life behind, and actually happy and relieved that it is all now behind him. He meets Leela, who is employed by the Cryogenics Labs to assign unfrozen people to jobs. She tells Fry about his living relative Professor Hubert Farnsworth. Leela then tells Fry that the job that has been assigned to him that of Delivery Boy. Faced with a return to the life of drudgery he knew in 1999, Fry While running around New New York, he enters a suicide booth (having mistaken it for phone booth) and tries to contact his nephew.

Fry is hired on at his nephew's company as a delivery boy. Faced with the ability to travel around space, Fry is pleased with his new position. At first Fry lives in the Planet Express building, but after an apartment hunt he ends up living in Bender's closet. Fry immediately develops an interest in Leela but, to his dismay, the feelings are not mutual.

His work at Planet Express sees him thrown into several absurd adventures: he is briefly in a relationship with Amy Wong, and while the company's bureacrat, Hermes Conrad, is away, he has an affair with the company's replacement bureaucrat, Morgan Proctor. Neither lasts very long, but when he almost destroys the Planet Express building and Hermes fires him (along with Bender and Leela) he gets Leela's former job by accident and finds his old girlfriend, Michelle, unfrozen. She does not enjoy life in the future, and asks him to come with her to the year 4000. After they wake up and realize that they are actually just in Los Angeles two days later, she dumps him in favour of Pauly Shore.

Fry as a Baby

Fry as a child 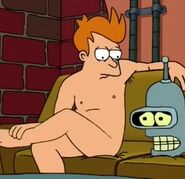 Add a photo to this gallery

Retrieved from "https://20thcenturystudios.fandom.com/wiki/Philip_J._Fry?oldid=34450"
Community content is available under CC-BY-SA unless otherwise noted.