"I'm a primate pirate pioneer and these are my brave buccaneers, all of whom were once lost souls like you.

―Gutt to Manny about his crew[src]

The Pirate Crew were a group of animals led by the seafaring Captain Gutt in Ice Age: Continental Drift.

Each member of the crew was saved from an unknown fate by Gutt, a Gigantopithecus. Together, they sail across the ocean on an ice ship, and save other animals, attempting to get them to join their crew. One day, they came across a mammoth named Manny, two ground sloths named Sid and Granny, and a saber-toothed tiger named Diego. They tied them up and tried to convince them to join their crew. The pirates sang Master of the Seas to prove Manny, Sid, Diego, and Granny were in luck. The Herd was able to get off the ship, destroying it. The Herd got to safety on a small iceberg. They ended up saving Shira, a female Saber-tooth Tiger and brought her along their trip. They found that the pirates were using hyraxes to help them build a new ship. They went to a jungle where they decided to team up with the free hyraxes to stop the pirates and get a new ship. They got the ship and headed off. They were helped by Shira, who tripped Gutt, in order to help them escape. Later, the pirates build a new ship which Gutt calls Sweet Revenge. He threatens Shira, and then they head off. The pirates held Manny's daughter, Peaches, and wife, Ellie, hostage. Peaches is saved by her molehog friend, Louis. Gutt is presumably killed by a siren and Shira leaves the crew and marries Diego. It is unknown what happened to the rest of the crew. 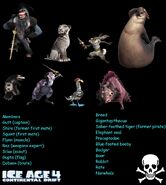