Garfield and Friends
The Garfield Show
Pooky is Garfield's huggable teddy bear and best friend, that Garfield discovered stuffed in a drawer. Pooky debuted on October 23, 1978. He most recently appeared in the comic strip on June 19, 2016

Garfield sometimes communicates with Pooky as if he were a living animal; he can also be over-protective of Pooky. When Pooky lost an eye, Garfield requested a new eye for Pooky as his Christmas present. Garfield isn't shy to show his love for Pooky, often grabbing him in hugs making Jon jealous. Pooky is generally portrayed as sentient but immobile. In one instance, Pooky is seen rollerblading past Jon, who assumes Garfield is playing a prank. 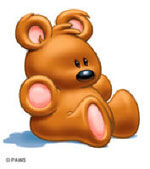