Rex Harrison was an English actor of stage and screen who began his career on the stage in 1924. He made his West End debut in 1936 appearing in the Terence Rattigan play French Without Tears, in what was his breakthrough role. He won his first Tony Award for his performance as Henry VIII in the play Anne of the Thousand Days in 1949. He won his second Tony for the role of Professor Henry Higgins in the stage production of My Fair Lady in 1957.

In addition to his stage career, Harrison also appeared in numerous films. His first starring role was opposite Vivien Leigh in the romantic comedy Storm in a Teacup (1937). Receiving critical acclaim for his performance in Major Barbara (1941), which was shot in London during the Blitz, his roles since then include Blithe Spirit (1945), Anna and the King of Siam (1946), The Ghost and Mrs. Muir (1947), Cleopatra (1963), My Fair Lady (1964), reprising his role as Henry Higgins which earned him the Academy Award for Best Actor, and the title role of the English doctor who talks to animals, Doctor Dolittle (1967).

In June 1989, Harrison was knighted by Queen Elizabeth II. In 1975, Harrison released his first autobiography. His second, A Damned Serious Business: My Life in Comedy, was published posthumously in 1991. Harrison was married six times and had two sons: Noel and Carey Harrison. He continued working in stage productions until shortly before his death from pancreatic cancer on June 2, 1990, at the age of 82.

Har­ri­son was born at Derry House in Huy­ton, Lancashire, the son of Edith Mary (née Carey) and William Regi­nald Har­ri­son, a cot­ton broker. He was ed­u­cated at Liv­er­pool Col­lege. After a bout of child­hood measles, Har­ri­son lost most of the sight in his left eye, which on one oc­ca­sion caused some on-stage difficulty. Harrison's film debut was in The Great Game (1930). His first starring role was in the romantic comedy Storm in a Teacup (1937), opposite Vivien Leigh. Other notable early films include The Citadel (1938), Night Train to Munich (1940), Major Barbara (1941)—filmed in London during The Blitz of 1940, a role for which he received critical acclaim, Blithe Spirit (1945), Anna and the King of Siam (1946), The Ghost and Mrs. Muir (1947), and The Foxes of Harrow (1947). He is best known for his portrayal of Professor Henry Higgins in the 1964 film version of My Fair Lady, based on the 1956 Broadway production (which in turn was based on George Bernard Shaw's 1913 play Pygmalion), for which Harrison won an Oscar for Best Actor. 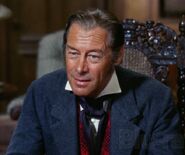