20th Century Studios Wiki
Register
Don't have an account?
Sign In
in: People, 1940s births, The Simpsons,
and 2 more

1980–2019
Russell "Russi" Taylor (May 4, 1944 – July 26, 2019) is an American voice actress. She has been the current voice actress of Disney's Minnie Mouse character since 1986, longer than her predecessors. She also does the voices of Martin Prince, Sherri and Terri, and Üter on the animated series The Simpsons. 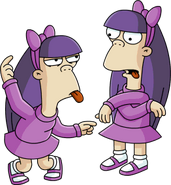 Sherri & Terri (The Simpsons)
Community content is available under CC-BY-SA unless otherwise noted.