20th Century Studios Wiki
Register
Don't have an account?
Sign In
Advertisement
in: Characters, The Simpsons Characters, Males,
and 6 more

Coltrane (a.k.a. Snowball IV) was the Simpsons' fourth cat. He bore a slight resemblance to Bart.

Lisa adopted Coltrane from an animal shelter shortly after the death of Snowball III. Originally, Lisa was not sure whether she wanted another cat. However, she was won over by his original name (Coltrane). 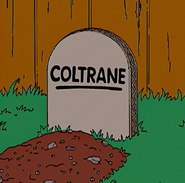