20th Century Studios Wiki
Register
Don't have an account?
Sign In
Advertisement
in: Characters, Males, The Simpsons Characters,
and 10 more

Virgil Simpson was runaway slave of Colonel Burns that young Eliza Simpson unsuccessfully attempted to help escape through the underground railroad; Eliza never discovered the fate of Virgil, whom she felt she had failed. However, Eliza's mother, Mabel Simpson, left her family in order to lead Virgil to Canada personally, leaving behind her treacherous husband, Hiram Simpson. On their journey, the two began to fall in love and even encountered Abraham Lincoln who offered his top hat to conceal Mabel's hair from the authorities. Mabel and Virgil successfully crossed the border into Canada via a bridge upon which Virgil proposed to Mabel. Mabel legally divorced Hiram and married Virgil, who took his wife's previous married name of "Simpson" since he did not have one of his own and "so that Mabel could keep all her monogram table linens." Mabel and Virgil Simpson then had a child, Abraham, who was Grampa Simpson's great grandfather and presumably his namesake. He is the earliest known member in general being Sven Simpson. 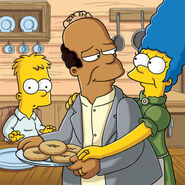 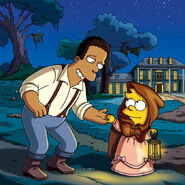 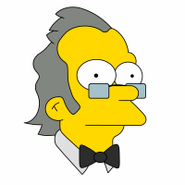