Walter Beckett is the deuteragonist of Spies in Disguise. He is a young adult making weapons and gadgets for the U.S. government

Walter graduated college when he was fifteen at the M.I.T. (Massachusetts Institute of Technology).

Walter has brown hair with white skin and blue eyes. He wears a zip-up hoodie on top of an untucked plaid green long-sleeved shirt. He also wears grey pants and dark red shoes. 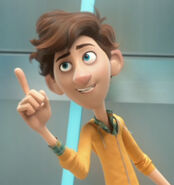